We are thrilled to announce that Howard Jones will be playing at Concert at the Kings on 30 May in 2015.

It was in 1983 that Howard Jones first burst upon the contemporary music scene with his very English song-writing and pioneering synthesizers. Anyone who was around in the mid to late eighties will remember those high energy gigs and his first two albums Human’s Lib and Dream into Action. They lived in the higher reaches of the album charts in the UK, USA, Germany, Italy, Sweden, Canada, Australia and many other countries in the 1984-86 period and the hits kept coming… 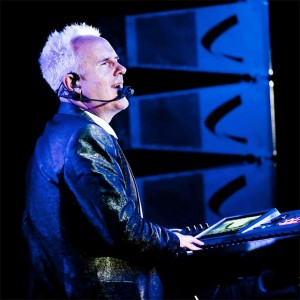 New Song, What is Love?, Pearl in the Shell, Hide and Seek, (which he performed at Live Aid in 1985), Like to Get to Know You Well, Look Mama, Things Can only Get Better, Everlasting Love and the quintessential No One is To Blame, which reached No.1 in the US.

A classically trained pianist, Jones applied his technique to the early synths particularly the Roland Juno 60, the Jupiter 8 and the Moog Prodigy. He also pioneered the classic Roland 808 drum machine and the Sequential Pro-One. In the early days he was triggering sequencers live on stage whilst playing and singing, something that no one had done before.

In 2015 Concert at the Kings will play host to one of the true eighties icons and godfathers of modern electronic dance music in full electric mode.
If you were too young the first time around it’ll be a chance to find out where all those beats and sounds came from, and if you were around it’ll bring all those memories flooding back.

Howard’s set will be eagley anticipated and we are absolutely delighted he will be joining us.