Line up and timings (approximate timings)

Timings to be confirmed

Dan Chisholm is again with us as compère for Concert at the Kings 2016.

A 38 year career in radio isn’t bad for the kid who dreamed of being ‘on the wireless’ from the age of seven.  Dan’s one of the most well-known presenters in BBC local radio and a great supporter of live music.

His involvement with today’s festival is extra special after his own run-in with cancer three years ago. After going to his first gig back in 1973 to see his guitar hero Andy Scott performing with Sweet, he’ll get the chance to introduce him on stage with Suzi Quatro.

Dan said:  “The importance of supporting a fund-raising event like this can never be underplayed. Thank you everyone … and enjoy your day!”

(HEALTH WARNING: only music lovers with a sense of humour should listen)

Representatives from the charities: Macmillan Cancer Support, Above & Beyond and Hope for Tomorrow, were all at The Kings Arms to receive cheques from the proceeds of 2016’s event. All Canning’s Parish Council also were presented with a cheque to be used for local good causes. 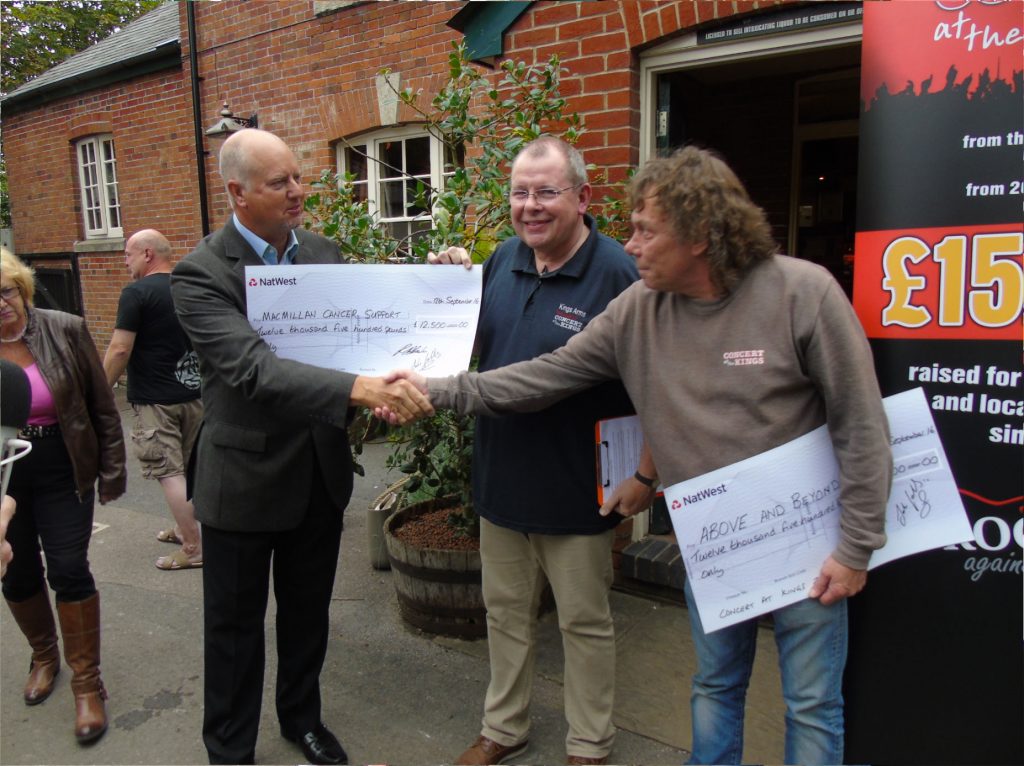 Thank you to all who have supported us and we are pleased to announce that Rock against Cancer will be happening again on Saturday 20 May 2017!

Thank you so much to everyone who came to Concert at the Kings 5 on Saturday. Well after 4 years of blazing sunshine, I guess we were going to get a wet one at some point…

Although it was wet, and at some times, very wet, the spirit of the crowd was not dampened and the voices of the crowd really did help lift all who were performing.

The Concert has a reputation with musicians of being a special place to play, and each year we have comments and reactions from those playing who have experienced it first hand. This year was no exception and the warmth from all the event’s supporters was felt on both stages.

As you can imagine, the clean up process is still underway and thanks to the tireless efforts of the volunteer crew we were able to get everyone away from the mud as quickly and safely as possible. But the field may take a while to turn green again!

Further reports to come, but for now it’s back to dismantling the stage and returning everything to how it was before the event.

Thank you all once again – it really couldn’t happen without all your support.

The Concert at the Kings Team

Take a look at what this hidden gem is all about…
“The biggest small festival in the world!”